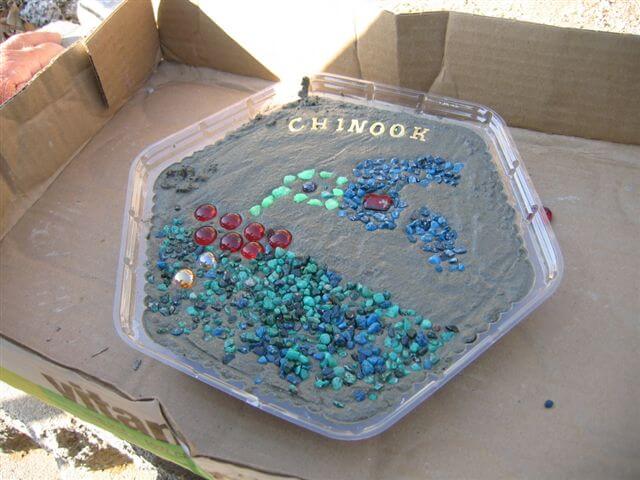 It was four years ago this week, July 27th that we closed escrow and began moving into the little house here on our 5.75 acres in Ramona.

I remember Norm was driving his truck, we pulled up to the front gate at the bottom of our driveway and I got out to open it. Norm got out of the truck too, which I thought odd since I was opening the gate which was a one-person job. After I opened it, he picked me up and carried me over the “threshold”! Such a romantic.

A lot has gone on here in four years, too much to mention here, but from the day we moved in until the end of 2006, this is some of what we did:
– That front gate is gone, and the entrance through the front fence where it once was, is now 8′ wider.
– We contacted the property owners behind us so we could clear their little pasture behind our fence. We couldn’t get fire insurance unless we had a 200′ cleared “defensible” space from structures. The back fence and their pasture that they never used for grazing their cows was only about 100′ away. We didn’t have the tractor with mower yet, so Norm did it all by hand with a weed whacker. He came across only one Yellow Jacket nest!
– The property was pretty clear of brush, but we picked up probably another 1/2 acre of plantable area by clearing bits here and there. We had a crew come in with chippers so we could turn it into mulch. That’s the mulch pile that burned during the Witch Creek Fire in 2007, and burned for months. We baked potatoes in it.
– We were sitting on the front porch one Sunday morning not long after moving in and watched a Mountain Lion stroll across the bottom of the field.
– I designed our logo and had business cards printed. The logo was inspired by a painting done by our friend Janet. It is of a hummingbird sipping from a glass of red wine. I also have an extensive collection of Pacific Northwest Indian art, with hummingbirds in some of them. Since Chinook is an native American word, it all came together!
– We had a “property warming” party. Many friends and family came from all over southern California. We had a blessing by members of my church, and two friends walked the entire perimeter of the property with burning sage to purify the land and bless it.
– My daughters and friends gave me a another party for my 60th birthday. Friends and family were invited to come, and in addition to enjoying food, wine and cake, make two stepping stones each, one to take home and one to leave here. Our friend Anne Linehan who has a company called “Setting it in Stone” in Leucadia brought out all her moulds and decorating items. Norm cranked up his concrete mixer and a grand time was had by all!
– We bought a Kubota tractor in December complete with 2 different sized augers for digging all the holes for posts and plants, a mower, box scraper, fork lift attachment and chain harrow. It is the BEST garden tool we have ever had!

Happy Anniversary to us!
Elaine & Norm