Three Cheers for the Volunteers! 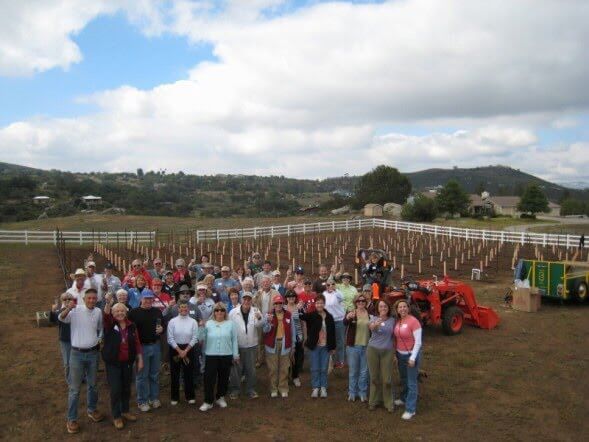 We have been very fortunate to have so many friends and some family too, who will work for food and wine. Norm and I have developed this entire vineyard ourselves with only their help. This picture is of the first group who came to help plant the first 300 vines in 2007.

The 2008 and 2009 groups were smaller in number – the reality of the work involved replacing the romance of the concept we guess.

We continue to have others who arrive regularly to work at one task or another. Originally that included such things as building the water tower for the irrigation system, pounding in line posts, and rolling grow tubes. We all then graduated to harvesting, pre-pruning, nipping & tucking, leaf thinning and hedging. Some have advanced to pruning and establishing cordons, a bit more technical.

Several of the ladies have put themselves in charge of kitchen duty whenever there’s a big work party. One regularly bakes brownies, squares, rolls and other goodies for us to have on hand in the freezer to feed the troops who show up, even if she’s not there to help that day.

We would not presume to list the names – we’d be sure to forget someone – but you know who you are. We thank you VERY much!